“Oh, so this is where we go to get the cocaine,” says Aaron Barrett as he flips through the latest issue of Exeposé.

Lead singer and only founding member remaining in the pop-punk-ska ensemble responsible for the up-tempo condemnations of the record industry Sell Out and Everything Sucks, he’s walked into the room halfway through the interview, followed by a tall, heavily made up, blonde embodiment of the rockstar lifestyle.

Matt Appleton, the group’s newbie sax player, also paws through the scandalous issue. “Does it tell us anything about where the marijuana is on campus? I’m looking for that too.” 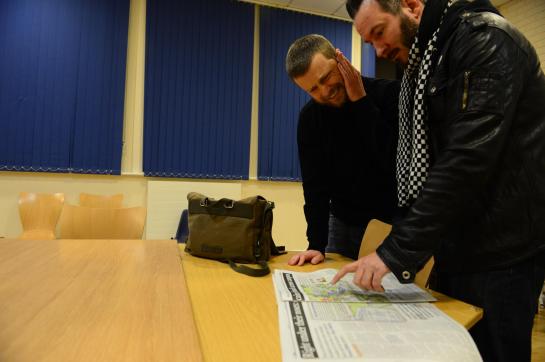 Sitting backstage in Cornwall House, the band look different to their colourful appearance in the video for Sell Out, still often played on VH1. Half the band members have been switched out, facial hair is less questionable and outfits much less saturated. But for Reel Big Fish, the crowd hasn’t changed at all. In 1997 they were playing to pits of energetic teens, and in 2013 they’re doing the same thing.

“That’s something that’s confused us over the years,” explains Dan Reagan, trombone blower since 1994, as our interview began. “We thought they’d all be thirty-” he pauses as the band chuckles at their age. “One! Thirty one, just like us.

“It was a little different in the 90s, I guess when Ska was more underground. We had a lot of proper Ska skins and bootwearing types who are a lot older than us. Once they realised we were silly and full of crap, they stopped coming to the shows and it was all the younger people.”

But the band doesn’t resent their perma-age fanbase. “It’s good,” says Matt. “It’s really good. When we played in Brooklyn a while ago it was over 21 – and it’s Brooklyn – so there weren’t any highschool kids there.”

“The thing with people in their 20s, 30s and 40s or whatever, they don’t go to concerts for the same reasons that kids do. They’re there for a different experience, they’re there to listen to the music and remember how they felt when they were a kid. And to stand and drink. Concerts to old people aren’t as much fun.”

“Not that we don’t like old people,” Dan interjects.

“Oh yeah I stand in the back, I’m as far away from whatever craziness upfront is happening.”

Dan remembers his angsty teenage years going to gigs, and Reel Big Fish’s formative years. “You can’t go to a bar and drink, all you can do is go to a diner and eat french fries and cause trouble. With the gigs, you had some place to go with all your friends and cause trouble and have fun. For young people that’s a big part of it, it didn’t matter what school you went to, you have your own sort of ‘life’ at gigs, so you could be anyone you wanted.”

Coming from a range of 90s ska and punk bands such as Goldfinger and Suburban Rhythm, the members have had their fair share of regrettable gigs. “It was at this grand opening of a dairy queen,” recalls bass player Derek. “and they were selling little $1 ice cream cones, so people would buy them just to throw at us. So my bass amp was filled with dry ice for years, I never cleaned it.”

But now Reel Big Fish fans wouldn’t dream of hurling dairy products at the band, even if they do shout for the same decade-old songs every night. “They’ll skin us alive if we don’t play Beer,” says Dan. “It’s always funny when bands are like ‘uh we don’t want to play this song we’re so over it’ and we’re like ‘wow – you don’t want to have everyone screaming at you because they love you, that’s so weird’” 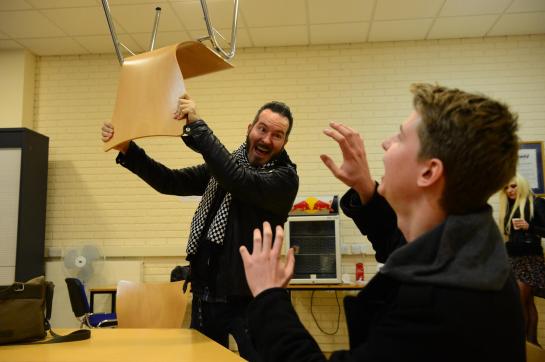 The literal, narrative style of their angsty numbers sound like they could have ripped from a 90s TMNT-watcher’s diary. “Aaron has the wisdom of an older gentlemen but the heart of a 17 year old,” says Dan. But the band aren’t trying to harken back to simpler times in the summer of Ska. “I don’t think there’s a feeling of nostalgia about it, it just comes out. You’re writing about what you know. Even when people get older they still want to tell people to fuck off – people giggle [at the songs] because they’re too polite. But kids,” he laughs, “Kid’s are gonna go ‘fuck you mom!’, or ‘fuck you Jerry!’”

“Fucken’ Jerry!” shouts Matt with as he starts to giggle. The groups starts talking about ‘Modern Sienfeld’, a twitter feed they had just discovered. Matt can barely control his laugher as he starts recalling supposed alternate plots: “I can’t break up with her now, her Netflix knows me too well!”

After a bout of nostalgia and discussion about which actors would be in ‘Reel Big Fish: the Nickelodeon high school sitcom’ (FYI Dan would be Nic Cage – “we have the same buggy eyes”), Dan explains how he misses the surrealism and irony of 90s alternative music. “Now it’s the opposite. Screamo and Emo is all about being very honest – it’s all like ‘Uh. Ow. My. Heart. Hurts.’” he ‘sings’, pounding his fist against the table rhythmically.

Monkeys For Nothing..: A piece of shit on a stick

It’s only as we’re about to wrap when lead singer Aaron strolls into the room, complete with leather jacket, checkerboard scarf and aging groupie. He decides every member of the room deserves a brief shoulder massage as we continue to talk about the band’s future after going independent in 2006.

“I feel like I used to be a lot more clever and funny. I’m old,” he laments while his eyes wander around the room. “Monkeys for Nothing was leftover bullshit.”

There’s a moment of silence before Aaron grabs the furniture in front of him. “Would it help the interview if I picked my chair up like this?” He lurches towards me. “And was like ‘goddamn why did you ask me that stupid fuckin’ question aah!’” Then Aaron freezes for the photo opportunity.

As Aaron and the feel as though they’ve put on enough of a show for us, they started to shuffle about the room and some of them head back to the trailer. We give them a copy of Exeposé and after locating the prime spots for their next hit (“In the disabled toilets.. fuck that I’m not licking any toilet seats”), Aaron makes a collection of paper hats for the band.

“Is that near here?”