By the end of my fifty-second round of Super Avalanche, my wrist is cramping up, I’m visibly shaking and I’ve got a big, stupid grin on my face. I’m ready to go again.

Endless runners and endless climbers always create a peak of rectum-clenching tension when you’re on your streak of seemingly impossible near-escapes. Yet, most will lose their grip after logging an hour or two of play time. Super Avalanche is different, it’s in for the long haul. With RPG-style upgrades and inventory management, calling this bouncy package of fun an ‘endless runner’ might be underselling it. 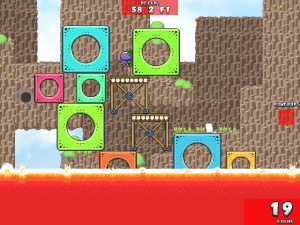 Lifting core gameplay directly from its web-based predecessor, Super Avalanche’s mix of meat-boy-meets-n+ style parkour and doodle jump’s upwards platforming is a much more technical challenge than it’s bright pixel-graphics let on. As lava rises from the ground, you must escape by climbing the multicoloured blocks which fall from above, while avoiding behind crushed by them or getting hit by aviary projectiles.

It’s challenging – there’s just no getting around it.You’ll start out playing it safe, hopping one step at a time as block towers fill the screen. Like this, you’re susceptible to getting crushed or having to scale jarring overhangs. With a little more time spent with Super Avalanche’s caricaturised interpretation of physics, you’ll start wall jumping from blocks while they’re still in the air, journeying across the screen and back in a matter of seconds.

Surfing up an oncoming torrent on blocks feels like an extreme sport. Each wall you push against, or snake you squish becomes a trick in your ever increasing combo. When you crack the difficulty curve, it’s unbelievably fun, and you’ll keep coming back to increase your best height. – but there’s much more to this indie gem than a simple high-score chaser. 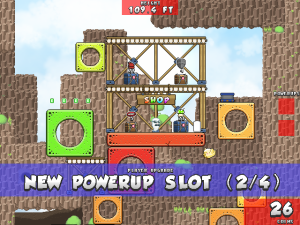 An economy fueled by the coins your faceless marshmallow protagonist collects drives Super Avalanche’s progression. You’ll gain some coins based on height, but to really make bank, coins have to be collected and deposited into a… bank. These banks, and the stores in which you spend your coin for mid-round performance boosts, also fall from the sky and can take some skill to reach. It means you’ll have to weigh up the risk of falling into lava or under a block by trying to reach the stores against the benefit they bring.

If you’re not a risk-taker, though, the coins you bank can be spent on (more expensive) permanent power upgrades – of which there are over 70,000 combinations. These can make traversal significantly easier, and some are required to progress further on.

You’ll also encounter bosses – usually larger variants of the monsters you’ve had to dodge in your ascension – which punctuate the high-speed edge-of-your-seat climbing gameplay with slower, more deliberate battles. But fail these (a one hit kill) and you’re right back at the beginning. At the moment it’s a little too punishing, and a five-minute run can end with little to no overall gain.

With power-ups and coins linked to a single profile, you feel ownership over your little white (or blue… or yellow, (depending on a number of buyable aesthetic customisations) blob – within an hour I’d climbed several miles with the guy, and I felt quite attached to him. 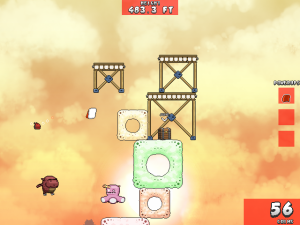 These profiles remain in the local co-op mode, which is a large part of the fun Super Avalanche has to offer – even if it’s a little rough around the edges. The gameplay, the levels and the structure are identical to the single player, but now there are two of you – you can imagine the rage and hilarity accidental collisions cause. But when the two of you get ‘in tune’ with each other, and with the flows of the game, it’s a uniquely fast co-op experience.

Currently a slightly buggy camera lets down co-op’s super fun gameplay, and it’s indicative of the entire state of the game right now. While the ideas and grand structure are clearly well-thought out and quite well developed, it still needs to progress a lot more from its current beta state. Key rebinding ruins menu navigation (jump is mapped to up, where people like me might prefer spacebar to prevent hand cramp) and the tutorial is awfully brief, leaving the games’ most interesting mechanics unexplained.

There’s a lot of fun to be had here, but it depends on your tolerance for failure. With randomly generated block formations, there’s no guarantee that you’ll do a little better each time – sometimes you just get lucky. If Beast Games can find a way of making Super Avalanche accessible for lesser skilled players, their little white bouncing blob could become a platforming and party favourite.

Avalanche 2: Super Avalanche is available to purchase for £4.99, half of the full retail price.